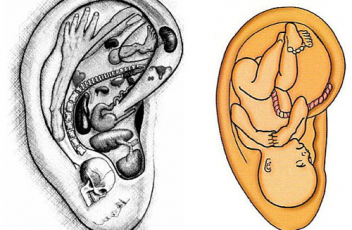 I trained in Auricular Acupuncture many years ago in London but actually never used the technique as I never quite liked the needles that were available at the time. However I am now delighted to offer Auricular Acupuncture in Brigg. That may seem strange to some as acupuncture means using needles to treat various health conditions. Recently, I became aware of other methods that could be used and ones that remained in place for a few days- semi permanent. I happily engaged in training and was amazed how much easier and better it was for myself and the client. As the needles (tiny little studs) are left in-situ it means the point of entry is continually stimulated. This is a bonus to the client as their treatment is on-going when they leave your premises. It is also done a-septically.

Acupuncture isn’t something new, in fact it dates back to 2500 BC and specifically mentions auricular (ear) acupuncture. More recently in 1957, a French neurologist Paul Nogier developed a fetal homunculus on an ear and introduced this in China where Traditional Chinese Medicine was first established.

There are various conditions acupuncture can help with such as; pain, weight loss, migraines, addictions, anxiety and it can also improve a host of other health conditions. Once the studs are inserted, you just forget about them as they will fall out themselves and aren’t a danger to others (usually when you are washing your hair or similar activity).

For those who don’t wish to have studs inserted but want to have the same points stimulated, we offer two other methods. First, we can use tiny seeds or gold balls that sit on the point and you stimulate them regularly. These balls/seeds are attached by sticky plaster and don’t usually fall off. The plaster is usually natural coloured so not easily seen by others. The other method used is a stimulating pen on the same points that would have studs inserted. There are several devices on the market and I use a Stimplus Pen.

This excellent device uses a current to stimulate the necessary points for 30 seconds each. It doesn’t hurt, in fact the studs don’t actually hurt being inserted either but it can be unsettling the first time you have this done as you don’t know what to expect.

Whichever technique you chose it will work. By stimulating the points, progress will be made. Give me a ring to discuss any questions you may want to ask and I’m happy to answer. Susan at Piece of Minds.

Most of us think rationally and logically on a daily basis but there are all times when our emotions can get the better of us and cause us distress. In the current climate, anxiety therapy in Brigg , is a much needed service!  There is a reason our body reacts in certain ways to different stimulus. As you all know emotions can be a mixture of happiness, delight, euphoria, sadness, fear, anger or disgust but there are many more emotions that each of us individually experience because we are all unique and we all have different coping mechanisms.

Emotions are in reality messages or signals produced by our body for safety and self-preservation purposes. They allow us to decide instinctively whether we are in a dangerous situation and react quickly just as wild animals do if they feel threatened.
The Fight or Flight sensation we experience as humans if we feel threatened is a physiological response triggered by our body when we feel a strong emotion like fear to a stimulus e.g. spiders, heights or violence. Fear is a completely normal emotion to feel in response to a danger or threat and it enables us to react quickly and either run, fight or freeze.

However, fear is also associated with worry, anxiety and panic. Whereas the fight of flight response was intended to provoke an immediate reaction to remove oneself when we see, feel, hear, taste or touch danger (by using our senses), we now find that our body can react in a similar way when we think about various triggers. A trigger can be something simple or more complex and a couple of examples of triggers can be giving a presentation or sitting an exam. Our body responds with strong, physical symptoms designed to briefly change the way the body is operating to enable a rapid physical response. We may not know the trigger but our body will react to a ‘perceived’ threat. The symptoms that a person feels in this condition sometimes can be traced back to an event earlier in their life.

Think something is wrong = anxiety = symptoms
Did you know panic attacks affect 2-5% of the population?

2. The sympathetic nervous system function is to activate the physiological changes that occur during the fight or flight response and adrenaline and other chemicals are released in the reaction.

In a fight or flight cycle there are many different symptoms people notice, some more than others. The circulation increases and the blood supply carries more oxygen to the brain, muscles and to limbs. This allows the brain to think less and react more instinctively. The muscles begin to tense for strength and speed while the pupils dilate to see more clearly. The heart beat increases causing blood pressure to rise, breathing increases and the liver releases sugar for energy. The metabolic rate increases and perspiration occurs to prevent overheating.

As the blood supply concentrates on the essential functions discussed above, this causes other organs and systems in the body to slow down. The digestive system reduces activity and this may cause a feeling of sickness or one can be physically sick. The mouth becomes dry due to constriction of blood vessels in salivary glands. The kidney, large intestine and bladder are also affected and slow down causing the person to want to go to the toilet.

So, what we must do is to learn to control this reaction. These symptoms are caused by a learned behaviour when you reacted to a situation or experience as I have said above. There are many things you can do to relieve these symptoms and the first is to understand why this happens and as you have just read my resume on this, you can now understand why your anxiety occurs.
You need to determine what caused the anxiety- is it a fear of something or is something coming up that you are worrying about. Your left side of your brain strangely controls the right side of your body and vice versa. The left side is the side which is responsible for logical, analytic thought, reasoning, number functions whereas the right side is responsible for imagination, creativity and art awareness. If a person had an EEG when they are in a state of panic, it would show over-activity in the left side and under activity on the right.

Fearing another attack or having the anxious feeling again may cause you to overreact and think negatively. This in turn will send messages to the subconscious and reinforce more negative thinking and behaviour. To avoid this becoming a vicious circle, you need to be acutely aware of your language (thought) patterns. Rather than thinking ‘I’m going to die in an attack’ you need to think ‘this is normal and it will be short lived and I can cope’. And I guess when you are thinking these thoughts, your tone is harsh and loud and not usual. This too needs to be addressed and you need to lower your voice (even if it’s the inner voice) and make it calmer.
One way of becoming calmer is to breathe slower in through your nose and then blow out as you exhale from your mouth slowly too. You can pop your hand on your chest to connect with yourself and feel the rise and fall of your chest wall as you inhale and exhale. As you breathe slowly the gas exchange will improve and you will begin to become more relaxed. You can say to yourself and you breathe in.. calmness and as you exhale.. relaxed.

You could also use your imagination and concentrate on thinking about being on a beach and throwing pebbles into the water. The more you stir the emotions of enjoying the beach, the less intensity you feel of the panic attack. Similarly, you can imagine yourself in the garden and smelling flowers, mowing lawns or relaxing on a chair.

Anxiety help, What other things can I do to help myself?

Relaxing hot bath (after the attack);

Count backwards from 30 down to 1 and concentrate on each number as well as breathing rhythmically and deeply;

Pop some nice aromatherapy oils (lavender) on a hankerchief and smell or pop on your favourite perfume or aftershave;

N.B. A brown paper bag to inhale/exhale if you are in a state of panic has been used for years but I read recently that it is now not considered a treatment to overcome the attack;

Distraction is a great way to relieve the symptoms of an attack. Clap your hands saying calm or peace and breathe rhythmically;

Another distraction is to pass a ball from one hand to next saying to yourself- left right, left right;

Think of three things that give you pleasure, then follow with three names you like, continue using your mind to focus on three things- animals, foods, places;

Do some light exercise to release the happy hormones;

Think of what you are going to cook for tea or something similar.

Menopause symptoms can be uncomfortable for some women at the least but unbearable at the worst. Having control of your body and being able to minimise ‘hot flushes’ or fatigue is a wonderful bonus don’t you think? Hypnotherapy is a wonderful tool to give you relief from symptoms and allow you to age without these side-effects! I have uploaded an information sheet with some good advice about how to beat the menopause so you can enjoy life and not let anything stand in your way! Hypnotherapy sessions can also be an excellent way to improve your mind-set for those who may be ‘stuck’ in negativity. It is easy to feel ‘down’ especially if we are surrounded by problems or negative people but we all deserve to live a fulfilled life and we need to break free of this to improve. So for those who want to progress forward and want to feel great- book a session and feel the benefits! Menopause