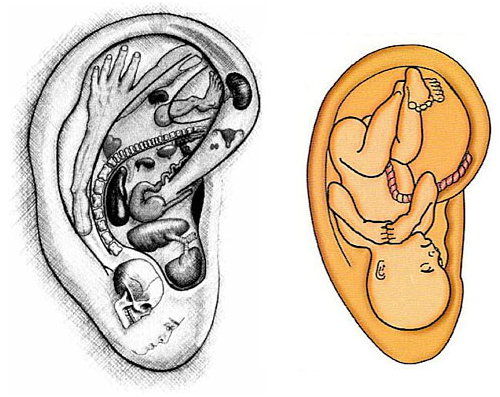 I trained in Auricular Acupuncture many years ago in London but actually never used the technique as I never quite liked the needles that were available at the time. However I am now delighted to offer Auricular Acupuncture in Brigg. That may seem strange to some as acupuncture means using needles to treat various health conditions. Recently, I became aware of other methods that could be used and ones that remained in place for a few days- semi permanent. I happily engaged in training and was amazed how much easier and better it was for myself and the client. As the needles (tiny little studs) are left in-situ it means the point of entry is continually stimulated. This is a bonus to the client as their treatment is on-going when they leave your premises. It is also done a-septically.

Acupuncture isn’t something new, in fact it dates back to 2500 BC and specifically mentions auricular (ear) acupuncture. More recently in 1957, a French neurologist Paul Nogier developed a fetal homunculus on an ear and introduced this in China where Traditional Chinese Medicine was first established.

There are various conditions acupuncture can help with such as; pain, weight loss, migraines, addictions, anxiety and it can also improve a host of other health conditions. Once the studs are inserted, you just forget about them as they will fall out themselves and aren’t a danger to others (usually when you are washing your hair or similar activity).

For those who don’t wish to have studs inserted but want to have the same points stimulated, we offer two other methods. First, we can use tiny seeds or gold balls that sit on the point and you stimulate them regularly. These balls/seeds are attached by sticky plaster and don’t usually fall off. The plaster is usually natural coloured so not easily seen by others. The other method used is a stimulating pen on the same points that would have studs inserted. There are several devices on the market and I use a Stimplus Pen.

This excellent device uses a current to stimulate the necessary points for 30 seconds each. It doesn’t hurt, in fact the studs don’t actually hurt being inserted either but it can be unsettling the first time you have this done as you don’t know what to expect.

Whichever technique you chose it will work. By stimulating the points, progress will be made. Give me a ring to discuss any questions you may want to ask and I’m happy to answer. Susan at Piece of Minds.